Alas we still saw no bustards but the scenery and weather have made up for it! We have stayed in several little walled border towns, one of which, Almeida is in the shape of a 12 pointed star. It had bastions, dykes, inner walls and outer walls, moats and cannons and was difficult to imagine what it must look like from above. The inner walls which we walked around were grassy, very pleasant surface for the dogs. We were greeted at the aire by a very enthusiastic German speaking Belgian lady and her husband who proudly brought out her 10 year old whippet, fussed enormously over Dash and Belle and then proceeded to show us photographs of all her 'late' dogs, explaining to us their names, where she had got them from and how old they were when they died. Several of them, it seemed had been rescues in years gone by from her previous holidays in Portugal, she said she'd been going there since 1969!

We've come today to the town of Arguedas on the edge of the Bardenas Reales Natural Parque (near Zarazoga) which we will explore over the next few days before the dash up the coast of France. Richard and Aoife came here on a field trip during their final year at University. Ric reminded me that it was here that he was bitten on the leg by a horsefly or some such, a nasty bite which got infected and his tutor had to take him to hospital here and again when he got back to Aberystwyth as it had still not cleared up. Nasty insects in Iberia, especially for the Cromptons........see below! 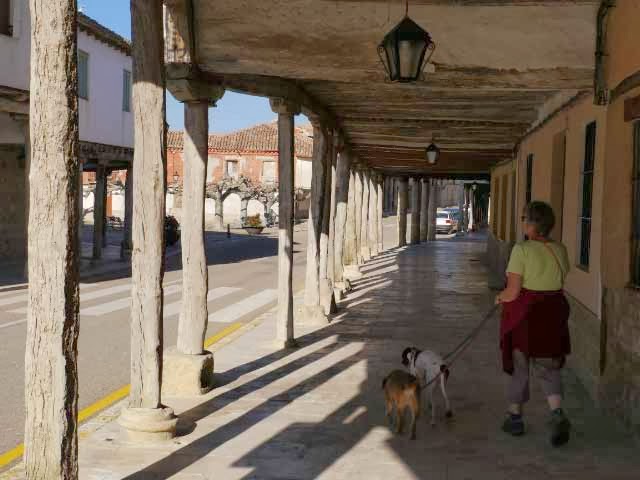 It's just one week till we need to be in Calais for crossing the channel to the UK on Monday 17th March. We're “booked” to stay in Warwick overnight and then home on the 18th just in time for Alana's birthday. I posted your card, Alana on our last day in Portugal.....I wonder who'll get there first, us or the card?

The scenery over the last week has been ever changing, it was very lush and green in Portugal, seems much drier here in Spain. Today the highlight has been the wonderful views of the snow capped Pyrenees in the distance against the blue sky. Nigel's “lowlight” today has been being stung by two wasps, once on his foot this morning (it was in his shoe) and once on his head just now. Could have been worse, could have been me!

Love the mimosa, they were also selling it in Dijon Market last Friday.

I used to work in a delicatessen and we sold Chrystalized Mimosa balls !

Yum yum, Jan! Did you ever taste them?

Caption: Come on Nigel, how long are you gonna stand there dressed like that with a load of old balls?