All good things come to an end....again

We had to tear ourselves away from Schwerin after 9 days or so, we found it one of those places that's hard to leave but mid July found us retracing our steps along the Alte Elde. We stayed in some of the same places on the return journey plus some different ones that we had noted on the way up. Also we have met and met again a few more English speaking boaters.

One highlight on the Elde was this amazing sight of a goshawk having its lunch on the towpath. We didn't disturb it as we motored past.


We lingered around the interesting town of Waren at the northern end of Lake Muritz. We had a problem with bow thruster batteries that were at the end of their lives and thought it was simply a matter of sourcing new ones to replace them. However we found to our dismay that the physical size of the batteries we needed had changed in the 4 years since the others were installed and they would not fit our trays without the brutal use of an angle grinder (which we don't have.) So plan 73b again came into the equation, we swapped the stern thruster batteries over to the bow and decided we would have to manage without using a different technique to moor. Fingers crossed for some windless days while we got used to it!

The day after we crossed the huge Muritz sea in a howling gale, an uncomfortable journey resulting in me being sea sick! I ask you....sea sick on a lake! The weather did eventually calm down again and begin to brighten up and we pottered onwards, having short days when we felt like it and stopping when we wanted to. Of the hundreds of Mecklenburg lakes and villages/towns we visited just a few of the most enchanting ones. There are many many more to explore if we come this way again.

The beginning of August saw us back in and around Berlin at the start of a 3 week unremitting heat wave. We loved it....yes some days it was so hot we didn't know what to do with ourselves and neither did the dogs but we did book an early morning trip up the TV tower, where from the top we got tremendous 360 degree views. We went out cycling early in the morning and late in the evening when it was slightly cooler and less busy and this time we did get up close and personal with the Brandenburg Gate, we'd not been able to get anywhere near it on our outward trip. 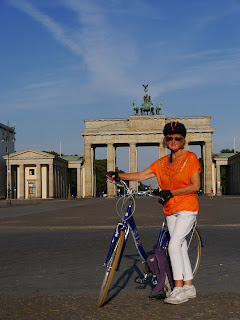 I tried every day to find a suitable spot for the dogs to swim and cool off which they were very grateful for. We used different waterways to get back to Potsdam and spent another week or so there on a free mooring where we'd stayed before. Behind us was a German converted barge called Malo with an elderly couple who swam in the Havel about 4 times a day. We had a dip too and very refreshing it was. Here the boaters' nightmare of a broken toilet came to haunt us but thankfully a spare part was ordered from a chandlery and arrived within a week. This meant that during this heat wave Mr. C had to have several long cycle rides to order the part, collect the part and then cycle back for tools to install said part but my hero successfully repaired the toilet...phew, glad we didn't have visitors that week! Thankfully we were moored within 200 metres of a supermarket with customer loos that was open 7am till 10pm for most of the time we were waiting.

Reluctantly we decided it was time to get a move on and make progress back towards Holland. We booked our lift out at the marina in Lemmer and our return ferry from Rotterdam to Hull for 1st October. Whilst it would not take all of the five weeks we have left to get to Lemmer we wanted to leave ourselves plenty of time for contingencies like bad weather and technical/mechanical issues.


So we left the lovely Havel Wasserstrasse with its myriad types of watercraft and entered the canal system to join the huge commercial barges on a miserable rainy 19th August 2015. We are now at the end of the Mittelland canal, the 388k “motorway” and on our way along the Dortmund-Ems and should reach Holland at or soon after next weekend. this week on Tuesday 25th August, we had our longest day covering 70.2 kilometres in 7 hours.


The following photos are a random selection of our trip since leaving Schwerin, not in any order, chronological or otherwise! 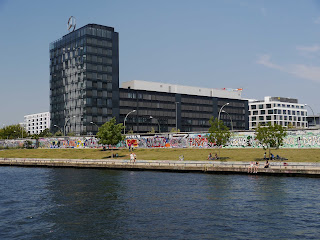 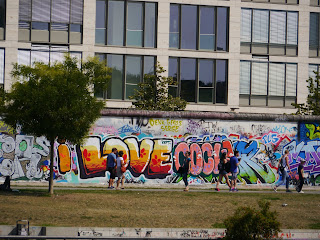 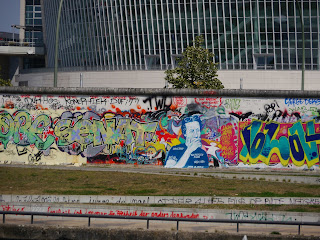