We arrived home in Bolton on Friday 10th March, just a few days ago. All the photos are from my iPhone this time, the official photographer has been pre-occupied!

We spent most of our winter this year in the Lagos region of the Algarve, staying mostly at beaches and by lagoons with the occasional foray into campsites for laundry and wifi purposes!
I've already mentioned the amazing birdwatching opportunities we've had which have made this trip so memorable, sharing this with like minded friends was all the more special.

The tiny village of Figueira was our last Algarve stopover and after that we headed north up the much wilder west coast, the region renowned for mimosa and cork oak trees, the mimosa had just begun to bloom and was spectacular on many of our walks.

We wended our way slowly up the west coast, lingering for a while around the town of Aljezur where we have been before but we hadn't then been to the nearby beaches of Monte Clérigo and Amoreira which were delightful and got the dogs' seal of approval for sure. One of the crops grown in the very fertile area around Aljezur is sweet potatoes. Someone told us to be sure to sample the sweet potato chips in one of the local restaurants...we did and were not disappointed! Just had to go back again to make sure though!

We then had a small touristy type itinerary of a week or so in the Alentejo region further north before the "Calais Dash" as we've come to call the return journey to the UK. There were places in the Rough Guide that we had read about or heard about from other people that sounded interesting and worthy of some time to visit. The first of these was Buddhaeden, an oriental garden where we spent an afternoon wandering around, it was surprisingly busy for a weekday afternoon. Glad we've been but once is probably enough! 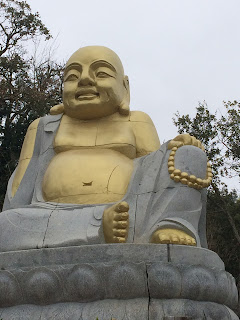 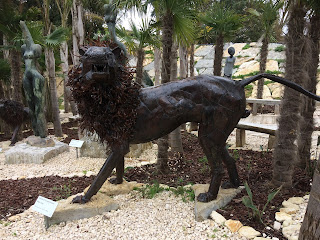 Next stop was Obidos, a charming little walled town, very touristy but we had a bracing 90 minute walk around the town walls (without the dogs as the rough guide described it as "tortuously narrow". It wasn't but we were glad not to have them with us.) 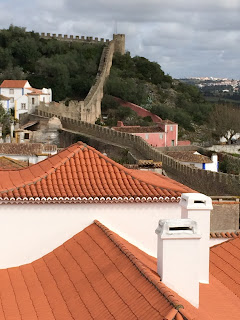 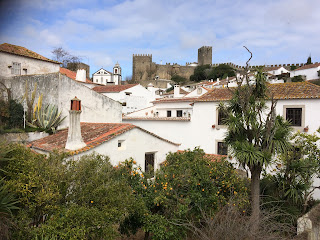 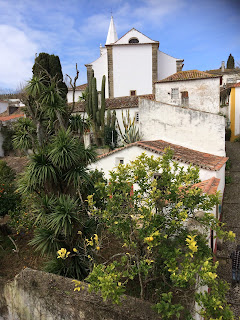 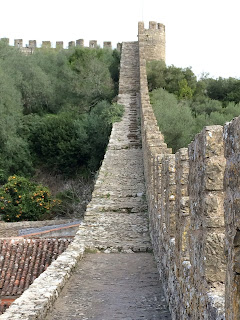 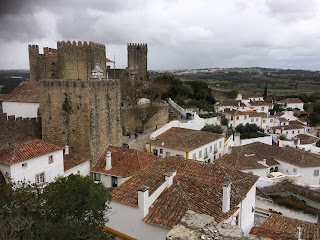 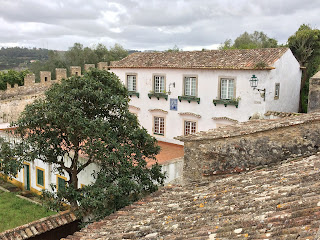 Next on our itinerary was an afternoon here where we stood in the footprints of dinosaurs, no photo's I'm afraid so the link is the best I can do for this entry!

Our last stop was to visit the Monastery of Batalha, a Unesco world heritage site which was splendid.

However, our abiding memory of our stay in Batalha will almost certainly not be the Gothic splendour of the monastery but of the unfortunate and uncomfortable incident which took place in the evening. I had made us a cup of tea after our evening meal and we settled down to drink it whilst watching a film on the laptop. Somehow or other, Nigel got his foot tangled in the laptop cord which then upended his very hot cuppa into his lap. The fastest striptease of nether garments you have ever (or never) seen then ensued accompanied by hysterical laughter and the grabbing of cold wet towels to apply to parts you never imagine will be scalded. I am glad to say that a full recovery was made with no lasting damage apart from the sheepskin seat cover which had to be thrown away!

We had an extra day in Batalha just to be sure all was okay before the long drive.

Our homeward journey proper then began, the crossing into Spain being a bit of a shock when we saw vehicles covered in snow driving towards us, we soon found out why! Thankfully we had plenty of gas so it was back to having the heating on all night....can't risk having a cold whippet!


In a couple of days we had crossed into France where the weather was awful, driving rain and wind, we holed out for a couple of days at Arcachon near Bordeaux. We managed to have a walk around the bird reserve without getting blown away and saw many avocets and black tailed godwits.

There then remained the traverse of France from South to North, this took two more days, including a vet visit for pet passport purposes and we arrived at the Channel Tunnel Port last Thursday night. It was very busy with many dogs being checked in and it was only in the morning that it occurred to us this was because it was Crufts weekend.

We crossed to the UK early Friday morning and arrived home mid afternoon with for once no hold ups en route on the M25 or M6. Many home comforts then became available, first of which to be enjoyed was a long hot shower apiece.

It's been a very enjoyable trip this time with numerous highlights, however, the best news of all is that 7 months after his ankle replacement surgery Nigel is now able to get out and about again, not pain free but in considerably less discomfort than he has been for several years. We hoped his mobility would improve but neither of us believed he'd be relatively comfortable in terrain like this again......


Posted by Libertetoo.com at 10:07 No comments: