Just a month after leaving the UK we finally reached Ghent where we first saw Meander, or Antonia as she was then called and agreed to buy her from her then Dutch owners. We moored in almost the same spot just a few hundred metres walk from the heart of the old town.

We came via a circuitous route and have experienced a mixture of quiet tranquil waterways with teams of lock keepers accompanying us on bikes and helping us through "small" 40x5 metre locks with a two metre drop and also wide, busy waterways teeming with huge commercial vessels, sharing locks that are 150 metres by 20 and have drops as big as 15 metres, one of which dropped like a lift....character building that was!

We spent a week in Ghent and now we are off to Bruges, after which we'll be heading to Diksmuide and then into France and the Somme for July.

Antwerp was our first major destination and we spent 4 days there exploring the city, some of its museums, the Cathedral and Rubens House. I mistakenly ended up wandering through the red light district one evening whilst walking the dogs......what an eye opener that was! We left Antwerp on the tidal river Schelde, sharing the tidal lock with some massive ships after a 2 hour wait.

Then we took the River Dender which led us from Flanders into the French speaking region of Wallonia and onto the Blaton-Ath canal. Towns we stopped at along the way included Aalst, Geraardsbergen which even had a hill, Ath, Beloeil and its castle and then Pérrones where we had a few days and eventually got our redundant radar arch removed at a shipyard so that we have a lower air draught for the French waterways. 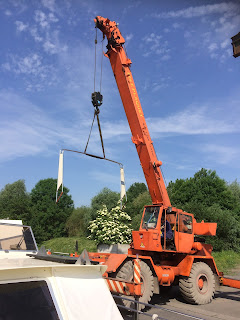 A brief stopover in Antoing was enhanced by the company of some other bargees who we knew and have met before.

Next it was on to Tournai, Belgium's oldest city which apparently was once English...not quite sure how that works! We only stayed one night as it was a very bouncy mooring, not very sympathetic to wine glasses or scaredy cat whippets! We managed to visit the belfry and the Cathedral which was swathed in plastic and scaffolding both inside and out!


Leaving Tournai was another challenge, having to call up on VHF to ask permission to pass the one way system. We were told which boat to follow when we got the green light. This was another busy and time consuming section with big locks to wait for.

Eventually we turned off onto a quieter waterway which headed to Kortijk and were back in Flanders once again. The River Leie was initially another fast and busy commercial waterway with huge locks and heavy traffic but at Deinze the commercials go straight on using a canalised section and plaisanciers use the quieter meandering river to get to Ghent. This was a lovely section, through some very affluent riverside developments with amazing architecture and beautiful green countryside.

And so we got to Ghent! We were moored opposite the back of the Ghent Opera House, on the Friday afternoon when we arrived there were some rehearsals going on, neither of us are fans of opera and we were wondering how we were going to cope but we haven't heard anything since, thankfully! It's not a quiet spot for sure, there were  trip boats, party boats and hire boats constantly going past and these don't stop till gone midnight! But it was great to be there again and we got to know the city which is lively and vibrant. We visited several museums, the belfry and the Cathedral and experienced extremes of weather, with intense heat some days and then violent winds and rainstorms on others.

The dogs are coping well with it all as usual, they've not had much off lead walking as we have been in cities much of the time but they don't seem to mind too much!

Posted by Libertetoo.com at 20:33 No comments: