A month on the road!

Feels like a lot longer but we've been away a month in the Motorhome and almost three weeks ago we reached our ultimate destination on the western tip of Portugal. Today is All Saint's Day, a national holiday in Portugal.

The first week and a bit was spent winterising our boat before we left her in her berth in Belgium. We have kind neighbours who are aboard all winter and who have our contact details should they need them. The weather was definitely changing, quite chilly at night but mostly dry during the day. Once we were satisfied we had done all we needed to, we set off for the long journey South west, first overnight stop being Luxembourg for cheaper fuel! Then into France for two nights and over the border into Spain. 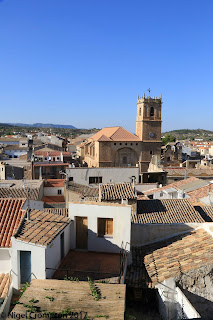 We had a catch up with our friends Bob and Anne who live near Valencia on the way down, luckily we caught them just before they were heading home to the UK for a couple of weeks. As always it was good to see them and we all wondered where the 4 years had gone since we had seen them last! One more overnighter in Spain saw us safely over the border into Portugal, clocks back an hour (same time zone as the UK) and we were at Europe's most south westerly tip, Cabo de St. Vincente, 2887 kilometres in 6 days.

This was our base for the next few days, camping by the lighthouse which was quiet once the day trippers and coach parties had gone home. The dogs were pleased to have beaches to play on again although due to the warm weather everywhere is still very busy, particularly last week which was half term.

Our reason for coming out earlier than usual was to see the Autumn raptor migration and we have not been disappointed. On Monday 23rd October, we were just setting off on foot to our birdwatching spot when we looked up into the sky to find over 1,000 birds circling overhead, mostly griffon vultures, an awesome spectacle, different groups of them twirling and changing direction as far as the eye could see. Amongst them were the odd eagle, booted, bonelli's and short toed and a few black storks also.  Earlier last week we felt we had bird overload and decided to come up into the mountains for a change of scenery whilst the weather was still so fine only to find the griffon vultures followed us into the hills!

Camping up at 1000 metres above sea level at an old observatory was a pleasant change and meant it was a little cooler and more comfortable at night though still very warm during the day.

On one of our walks we discovered two sweet chestnut trees absolutely heaving with fruit......very, very prickly fruit which needed specialist handling to collect. Nothing quite as tasty as free, self foraged food although they were quite difficult to peel.

We'll be moving on tomorrow, a little further east but still inland to another spot that is recommended for birds. The raptor migration is just about over now but there are plenty of resident birds still around and who knows, maybe some more "first ticks" for us to collect.