Here we are in the Western Algarve region of Portugal again but this time we have rented an apartment instead of driving all the way from the UK with the motorhome. It's different, very different but we wondered if we would like it and you never know until you try!

It's great to have more space, especially to welcome guests, good to have wifi and basically to have all the amenities in situ that we have to drive around to replenish (water, waste disposal etc.) in the camper. But it has been strange to be in one place for so long and we've been just a little green on occasions when we've been to some of our favourite wild spots in the car and found other campers there on "our" spot!!

We came out at the very end of October, sailing from Portsmouth to Bilbao with Brittany ferries quite full of trepidation about how the dogs would take to being on a ferry for 32 hours, albeit in a pet friendly cabin and how we would cope with the trauma if the answer was "awfully". But we were pleasantly surprised, they settled really well, the cabin and the crossing was comfortable and trauma free and after that it was a two day drive from the north of Spain, stopping overnight in an Ibis hotel in Salamanca to our destination just outside Lagos. Our accommodation is right in the heart of "apartment land" and as our son said when he came to visit, not somewhere that we would ever have thought to see ourselves. But we have a sun terrace which gets the morning sun and we have good dog walking and cycling opportunities right from the door. It's a ten minute walk down to a lovely beach but sadly, our eldest dog, Dash can no longer manage that walk so we drive down when we are having a staying local day.

Arriving later in the year meant that we missed the best of the autumn bird migration this time but  early November on arrival found us heading to our bird spotting areas most days until the numbers dwindled and we did have some good days although nothing like the volume we saw last year. We checked in on the Eagle Owl we saw last December and were pleased to see him perching proud and tall on the same cliff ledge.  The birding highlight of this trip has probably been the Green Heron who we had heard before we set off from home had been blown in on the tail end of the American Hurricane in November.  He/she shouldn't be here but was one of two rare American vagrants, the other being spotted North of Lisbon and has made himself quite at home on the ornamental lake at the Quinta do Lago Golf course near Faro Airport. As far as we know he is still here, we've had several trips to and from the airport and call and try to see him each time.

Talking of airports, we've had two lots of visitors so far, Richard and Aoife came out at the end of November and then our friend Philippa arrived for a few days a week or so after they had left. It was a lovely social time and although it was not the best weather when R and A were here, they got a real flavour of why we like to be here and away from the winter gloom of the UK. Luckily for her, when Philippa arrived, we had wall to wall sunshine and apart from a few drizzly days in late December, that continues now. It's cooler now but extremely uplifting to wake up to sunshine and blue skies every morning.


Just before Christmas I flew home to Bolton for almost two weeks to see the family, it was Nigel's suggestion back in the summer when we were still boating because he knows how much I miss them. It was the longest we've been apart in 45 years but it was lovely to see the littluns and be part of their Christmas and New Year celebrations. I was made very welcome on Christmas Eve and Christmas Day at Alana's parents and was delighted to discover that Alana's sister is expecting her first baby in May, a cousin for Hattie and Percy. 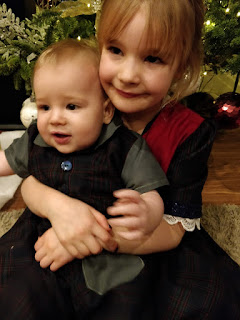 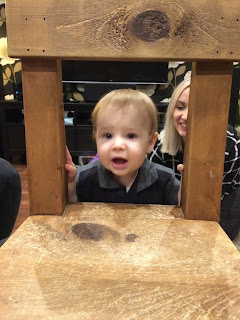 I was on hand via WhatsApp for culinary advice for Nigel and he took great delight in telling me he had successfully made white sauce to accompany his individual Christmas Puddings that he'd managed to purchase!! I of course had company some of the time, met up with Philippa again and Richard and Aoife came up and stayed overnight with me before spending a Sunday with Andrew and Alana and the grandchildren.  Rare to have them altogether and it was a joy which even the grotty weather couldn't spoil. Nigel was alone apart from the dogs but he enjoys his own company and kept himself busy walking them, cycling and watching whatever he wanted to on the box!

I returned a week ago to sunshine and blue skies again which are scheduled to continue as far as the forecast takes us. We want to get up to the Alentejo region again in a few weeks in the hope to see cranes, bustards and lesser kestrels but the kestrels won't be coming back to the area till nearer the spring so we'll postpone that visit till February. We like to spend a few days in the area but this time of course, it'll have to be a day trip.

Here's a few more wonderful bird pics to finish with......

Lovely photos! What beautiful birds. I’ve been thinking about renting an apartment in the Algarve for a month next winter too so I’m interested to know how you are finding it. We’re in Olhao for just the week. I doubt if we’ll be coming west this time, though as we’re just using public transport and want to go east a bit. Have a lovely time! Val x

Awww, Val. What a shame we can't meet.....again!! We personally much prefer the western end of the Algarve but it's all down to personal choice. Enjoy the sunshine11