I have neglected my blog lately and now I come back to it in a completely different world to where I left off which was introducing Ditto in November 2019. We all know now how tough and challenging this time of pandemic is, I am not going to attempt to write more platitudes about it but simply to let you know what we have been up to the last few months.

We are now at home in Bolton, we got back from Europe on 6th March having spent several weeks in Spain and Portugal. Normally we spend more time there but things to do here meant we didn't leave till early January this time.

At the beginning of December 2019 we had a family get together at Richard and Aoife's in Leamington Spa, a sort of early Christmas because they were going to be spending the festive season in Japan. As always it was joyous to have my two boys, their partners and the grandchildren all together with the added bonus of Aoife's mum as well. Then we had the pleasure of being at home for Percy's second birthday, little did we realize it would be the last family gathering for quite some time!

We spent Christmas at home in Bolton, both under the weather with some kind of virus and then went up to Cumbria to spend New Year with our friend Philippa. It was Ditto's second long trip in the car and overnight stay at Philippa's as I had been up on my own with them earlier in December while Nigel was away and he kept us entertained by tangling himself up in her Christmas lights and charging up and down the stairs for no reason. (Ditto, not Nigel!!) We had a lovely walk on New Year's Day morning during which we heard a hunting horn and then loads of hounds came gallumphing along from all directions and disappeared over walls and fences We had a pub lunch before driving home to Bolton and a quick visit to the family in the afternoon.

We left for France shortly after New Year and whistled through it and on into Spain as quickly as we could. We then decided to take our time as the weather was reasonable and we wanted to see some parts of Spain we hadn't previously been to. First overnight stop was Pamplona where we had a walk up to the old part of town and around the Citadel. The next day we headed to Olite where we visited the splendid Royal Palace and had  amazing views from the towers.

A couple of years ago we had been told about a national park where griffon vultures breed and as we weren't in a hurry this time we decided to go and investigate.

We spent a few days here at Sepulveda exploring the area by cycle (Nigel) and on foot and the griffon vultures were numerous and close. The town is high at 1009 metres so it was very cold overnight but we had lovely sunny clear days while we were there and were really glad to have been recommended (by some German birdwatchers who we met in Portugal) to come here. It was a great walking area for the dogs even though it was a national park they were allowed to run free. Until Ditto tried to catch a low flying griffon, that is. With scary drops from the steep cliffs we decided he'd better stay on lead! We liked it there so much that we determined to visit again on our way home.

We crossed country towards the west after that and slowly southwards, exploring more towns we'd not been to or even heard of before, many of which had stunning castles and ramparts to visit, always of course at the top of a hill.

After Cortegana castle we took minor roads guided by our motorhome specific GPS to lead us into Portugal rather than retracing our route to the motorway. Oh dear, nearly gave birth to many kittens as after about 15 kilometres the road got more and more pot holed, steep and degraded. Turning round was impossible so Nigel got out and walked about 3 kilometres downhill to decide if we could make it or not. If the answer were not, we'd still be there now! We dumped all the water to make the van lighter and went for it, slowly slowly, rocking from side to side. I wish I had taken a photo of the road below us but at the time I didn't think! Phew, we made it without anything breaking and were never so glad to see a long streak of tarmac stretching ahead indicating the white knuckle ride was over.

And so, three weeks after leaving home we arrived in Portugal, along with thousands of other camper vans. Now I know we are part of the problem because we have one but this year was not as pleasant as it has been in the past because of the sheer numbers. We are respectful, always aware that we are visitors to another country and don't park where there are signs forbidding motorhomes, we don't put chairs outside unless we're on a campsite and try and be discrete. We had read before coming that the Portuguese police were cracking down on volumes of campers and moving them on or fining them, often in the middle of the night.

At Alvor we met up with Glen and Pete, our ex campervan and boating buddies who were having a winter break. We had breakfast together one morning but had to sit outside as we had Ditto (don't trust him on his own in the camper!) and the heavens opened just as we finished eating so it was a hasty goodbye and back to our vehicles. The next day we met up with some more birdwatching friends, Nigel and Angela  and their dog Ellie. It was good to see the three dogs playing on the beach but I didn't get any decent photos unfortunately.

After Alvor we made our way slowly west along the coast. We were turned away from one of our all time favourite overnight spots by Alvor lagoon. The police said we could visit for the day but were not allowed to stay overnight as it was "dangerous". At Luz a British registered motorhome pulled up behind us and imagine our surprise when we discovered the couple in it had two whippets and are from Dewsbury, just over an hour from our home town! We spent a few days together and the dogs played a little on the beaches. We've kept in touch and hope to meet up again in the future.

Birdwatching was mostly incidental this year, we didn't have many days where we went out to specifically look for a particular bird. We saw the usual suspects and a few new to us.

No visit to the Algarve would be complete for us without a few days at our favourite beach of Figueira. It's only accessible on foot and by the time we've walked there from the camper park, spent a few hours there playing on the beach and walked back we have very tired dogs!

Next visit was to Aljezur and its stunning beaches up the west coast and a meal at the Fonto do Vale restaurant where the sweet potato chips are divine! The next day we headed up to the high spot of Monchique where the weather was bright but cold and windy.

Then it was decision time, we ummed and ahhed about what to do, we had several weeks left but for some reason were not so comfortable or relaxed in Portugal as we have been in previous years. Having so enjoyed Spain on our way down, we decided that we would head back there and see some more of the country before heading north. Although there are also many campervans in Spain in  the winter, because it is a bigger country the spread is much thinner and we felt we would be happier there. I particularly wanted to visit Cordoba which ordinarily would not have been on our route home so we planned it into our itinerary and was very glad to see it. Islam meets Gothic in this extraordinary building which I found stunningly beautiful. 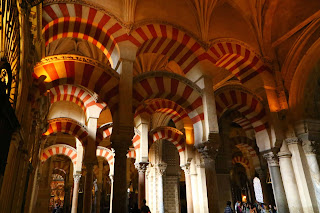 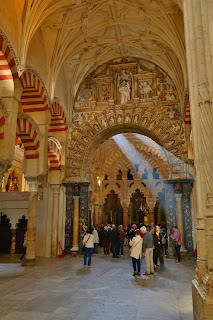 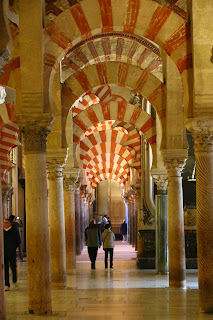 After Córdoba, we discovered more history in the hilltop town of Alcalá la Real 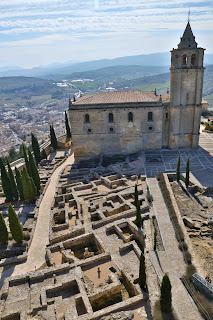 Our final area for exploring before heading homewards was around Mazarron and Cartagena where we were blessed with blue sky and sunshine and lovely dog walks in the campo. An area we will be returning to for sure. 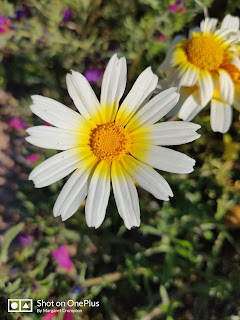 And did we return to Sepulveda and the griffon vultures again???? No, we didn't because it was even colder in March when we were heading home than it had been in January! As we passed the junction for it I checked the weather forecast, snow and high winds were due so we gave it a miss! There'll be other opportunities, we hope. We got home just a few days before Spain went into lockdown and it wasn't long before things became similar here, though the Spanish lockdown has been far stricter.

Sadly the family wedding in Cambridge of my niece that we had been looking forward to mid April was cancelled/postponed because of the current situation and at the moment of compiling this blog we are awaiting news from her brother and his wife of the birth of their second child which is imminent. A scary time to be giving birth and having a newborn I should imagine.

Our future is of course on hold for the moment as it is for everyone at this uncertain time. No boating is planned or feasible  this year as we can't even visit Belgium to check on the boat. We do have plans for our next stage of retirement which includes becoming much more familiar with Spain but they will have to wait until restrictions are lifted and life gets back to some kind of normality. To this end I am determined to use the lockdown time profitably by attempting to learn Spanish. I have made a start, pero es muy difícil para mí.

Until then, stay safe everyone and more news next time.

Nice one Maggie. A world outside our four walls (ad the garden).
Hope you're both well.
Love from us. xx

Thanks Jo and Janna, same to you, just plodding along and keeping safe. I think boat and motorhome life have stood us in good stead as we spent a lot of time naturally self isolating, hence the great social occasions we used to enjoy on the boat when we did all meet up. Keep the one liners coming, they cheer me up every morning!!

I found it! Well done. Beautiful pics. Spain is very attractive, isn't it. Good to meet with friends. Love to both. Xx

Thanks, you too and hope we can manage to meet up for that dog walk and pub lunch before too long. PS the birthday card has arrived but I've not opened it yet!!